The doorbell rang last night to tell me that Halloween was gone and November was already here. Okay, it didn't ring all that much -- I was sitting by the door with the candy, handing out goodies to about 128 trick-or-treaters. But those details don't change a thing; I'm not even finished reviewing all the great Octoberfest beers in my fridge and already it's time to say hello to the great end-of-year seasonals coming out.

Well, dang it, I ain't ready to go, yet. So I'm going to hold on to the harvest season a little longer by reviewing a new Texas brewery and a new harvest beer: Texas Farmhouse Ale by the Fort Bend Brewing Co.

Now, this is the second Farmhouse Ale I've reviewed this year (the first being review number 061 back in June: Blue Moon Short Straw Farmhouse Red Ale ), and although they do compare favorably to one one another, I still prefer the smoothness of the Blue Moon ale. Nevertheless, this is definitely a worthy contender if ever the two were to duke it out in the barnyard to see who is cock of the walk.

This ale has a very spicy nose. I detected a lot of spices and citrus. The label lists Pear and Banana, and I might be tempted to agree with the pear notes, but not the banana. The hops are pleasing on the nose and not as strong as I expected. 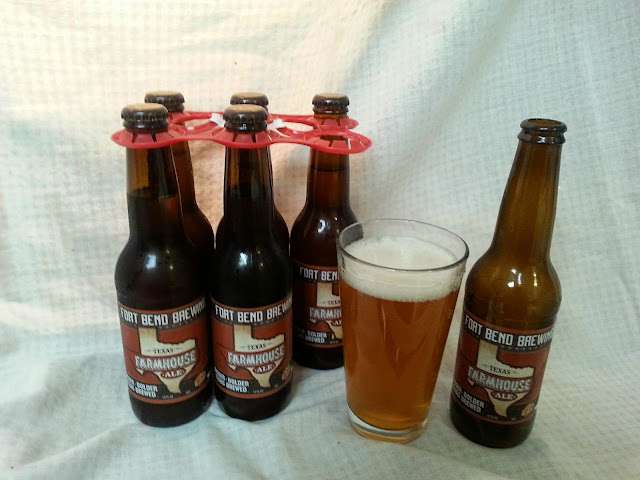 The pour was very disappointing. The first glass had almost no head at all from a conservative pour. A second bottle poured later yielded a decent 1-finger head from a very aggressive pour, but all but a flat beer will give you that. And that's the surprising thing: I was expecting low carbonation, but that's not what I found. It's actually got some tiny bubbles dancing around inside it. They actually helped make the sour aftertaste pleasing, but I'm ahead of myself.

When I took a sip of the hazy brownish/yellowish brew, I was delighted to find about what I expect in a farmhouse ale: a slightly sour seasonal that has aromatic hops with a hint of refreshing bitterness. A Flemish Sour definitely comes to mind when I drink this. And I admit that's a category I'm not all that familiar with, so more research -- and thus more bottles of beer -- will be required!

"Our Belgian-style Farmhouse is a full-flavored, golden ale with wonderful aromatic hints of fruit and spice. An initial scent of banana, pepper and herb are blended with flavors of crisp fruit and mild citrus with a sweet, lingering backbone. The full mouthfeel finishes pleasingly tart and ever-so slightly dry."
Unfiltered; Banana, Pepper, Citrus, Pear – all from Belgian Yeast
-- From the label

This is a decent farmhouse ale. It has the right hints of citrus, pepper and other notes to make it a pleasant way to kill an evening as the harvest moon rises above in the starry, starry night. As it uses a what malt, I probably won't be buying this again (longtime readers will remember that wheat beer turns my face red, so I've stopped drinking it because I don't want it to contribute to me developing a wheat allergy). However, I'm not worried enough that I'm going to gift the remaining four bottles to family and friends.

Oh, and that brings up an odd thing about this beer. The packaging. As you'll see in the photo above, this beer does not come in a cardboard six-pack, but rather with a plastic holder that slips around the necks of the bottles. I don't care if this is "green" or cheaper. This is dangerous. Whenever I picked it up from the top, the bottles would clink together VERY LOUDLY. And I had to cradle the bottles by their bottoms because the whole thing felt so precarious. Even the checkout lady at Spec's agreed and said no one in the store likes bottles packaged that way.

Thoughts from the bottom of the glass:
Type: Farmhouse Ale
Color: Hazy Brownish Yellow
Aroma: Spices, pepper, hops
Hops: Nicely bitter and not as strong as expected
Malt: Provides a foundation of sweetness for the sour to play off of
Head: Depends on your pour: Aggressive pour gets a 1-finger head, a soft pour gets almost nothing
Lace: Surprisingly strong for such a weak head
Bitterness: Present, but plays well with the sour notes
Carbonation: Medium, tiny, tiny bubbles that contribute to the haziness
Mouthfeel:  Dry with sour finish
Temeprature Sweet Spot: 55-ish degrees
ABV: 5.4%
My Rating: 6.5 out of 10

Other Reviews Worth A Sip:
Beer Advocate and Rate Beer were not overly kind to this beer. Some didn't care for the aroma at all, even describing it as sulfur and rotten eggs. Since this is the most extreme negative review, I'm thinking it's him, not the beer. The aroma has some sour notes, but nothing like that.
Posted by Mike Mitchell at 1:00 PM