Got a call from an old friend (we're still close)...

My buddy Murphy just texted me from a liquor store in Indianapolis. He was looking for some beer suggestions for the evening. He's seeking quality, not quantity, so he thought he'd mine my depth of experience to find something new.

The first thing I suggested was one of my new fave's from the blog: Moylan's Irish Red. Alas, my bud doesn't like reds. Personally, I can't say I've had enough Reds to form a solid opinion on them... obviously more research is in order. Oh, woe is me!  It's a tough job, but somebody has to do it.

But back to Murphy. I suggest Ugly Pug, but they're out. So he starts to prowl the store and he sends me a few snapshots of things he finds. First he says he found one that looks like it was out of a Cthulhu story: Elsa Von Horizon. 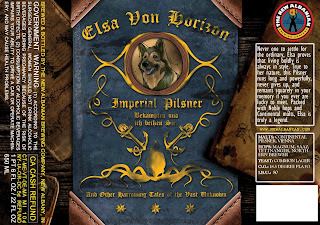 With the Westminster Kennel Club Show just a week gone, I thought this label with a cool German Shepherd on it was just too cool. Alas, Murphy decided to pass on it.

He poked around, considered some Magners Cider, and finally settled on something tried-and-true: Sam Adams Black. That's a good choice and I certainly can't blame him for heading to a "comfort food." Heaven knows, I tend to turn to Shiner Black when I'm feeling down and want something comfortable and familiar.

But, Murphy has definitely intrigued me. I'm going to request this at Spec's and see if they can set me up. Otherwise, I'll try to hit the Internet and see if I can find it. 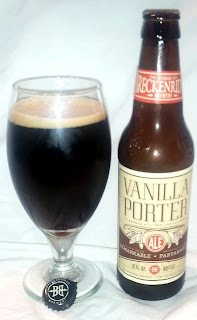 UPDATE: Got some more texts from the Murph-man, and he's heading home with a FREE bottle of this yummy delight: Beckinridge Vanilla Porter. They were having a trivia contest in the store and he answered the history questions correctly (even correcting the trivia monkey on two of the answers).

"And they say a history degree won't get you anything. It got me a FREE beer!" he texted.

Along with this freebie, he went home with a six-pack of Woodchuck Hard Cider and the aforementioned Sam Adams Black Lager.
Posted by Mike Mitchell at 7:18 PM No comments: