Good habits are the easiest to break. I think anyone who's ever dropped a few pounds, given up smoking or just make the time to take your dog for a walk every night (even in a light rain after a long day at work) can probably attest to that fact.

Blogging about beer was the habit I broke recently... and I'm trying to get back into it.

As I noted earlier, I got very busy at the end of last year, then I got pretty darn sick (a chest infection that came and went -- mostly came -- from Jan. 1 thru March), and then of course work hit again. The short version is, after a combination of factors, I fell out of the habit of doing something I love: Drinking new beers and writing about them.

So here I am, trying to get back on the wagon, so to speak. I'm going to try resuming my weekly odyssey down the beer aisles and let you know what brave new brews I discover. 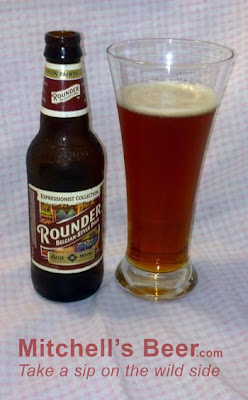 My first foray into new waters hails from familiar folks at Blue Moon Brewing Company. If you check past reviews, you'll see that I'm a fan of their Winter Abbey Ale (and although I haven't yet reviewed it, I'm also a fan of their Belgian White). So, I have to admit I came into this with high hopes and expectations.

Also, as things warm up here in Houston, I'm also a fan of pale, lighter beers. In other words, when the heat is on I prefer to cool things down with a lighter, paler beverage. And this one definitely delivered.

I like this beer. The aroma was the first thing I noticed when I opened the twist top. Hints of floral and citrus -- the label states that these are hibiscus and orange peel. I'm no gourmet, but I'll take them at their word. I also detected a hint of pepper that was also pleasing.

My first drink was straight from the dark brown bottle while watching a TV show. I was munching on some salty snacks at the time and it really complemented my gnosh. I'm not gonna lie -- in four days I finished the six pack while chilling in the evening or after doing some chores around the house. Tonight I went back to the Kroger's in NW Houston and bought a second six-pack so I could review it. Even at about $8 a six pack, it's totally worth it.


This time I poured it into a glass and photographed it, making sure I lit it to catch the delightful amber brown color. As you can see in the photo, though, when I poured it at a cold temperature I didn't get much head. Even with a moderate pour, which means I start off letting it hit the side of the glass and then finish by letting the liquid slam down the middle of the glass in an effort to agitate it into releasing the carbonation, there just wasn't much there. The head did improve when I poured my second glass at a warmer temperature and with a much more aggressive pour (just dumped it right into the middle of the glass). In this case it delivered a lot of head with a nice, clingy lace.

First Bottle - Cold
Despite the cold temperature, the beer released a lot of aroma. The florals and citrus dominated, but the other aromas were there and carried through to the tongue to deliver a nice, gentle balance of flavors. I enjoyed the presence of the hops, but they didn't dominate. I found everything to be working together without a single flavor note taking over. If I had to pick, though, I'd say that the malt is a little stronger than the other ingredients. But it's more like it's leading the parade -- that is to say, although it's a little bit more out front, it's still in the same band uniform as all the other flavors so it really doesn't stand out too much.

Second Bottle - Warmer
I don't have my beer thermometer handy (I'm wondering if my wife swiped it for candy making?), but I'm guessing this beer is well over 50 degrees when it makes its transformation from mild, balanced beer to a more aggressive brew. At a warmer temp, the spices and hops stop being bottoms and decide to switch-hit to become tops. They make the beer have a stronger flavor that overpowers the malt. This isn't necessarily a bad thing, but it's not the beer I met a few minutes ago. Still, the stronger flavors give it more presence to stand up to salty snacks like chips and dip. Although different, I still like it.


A few words from Blue Moon
This beer is part of Blue Moon Brewery's Expressionist Collection. According to their Website, this means:

"For this collection, our brewmasters found inspiration in the rich heritage of classic beer styles, but, of course, they added their own twists along the way."

For some reason, this beer doesn't have any info at their Website, so this is from the label:


"In the 1940s, Belgian-Style Pale Ales grew in popularity and were ordered by the round due to their balanced taste.  Our brewmaster's expression of this sessionable ale is crafted with hibiscus and orange peel for a hint of spiciness and touch of wheat for a smoother, rounder taste."

Thoughts from the bottom of the glass:
Type: Belgian Pale Ale
Color: Crisp, clear amber
Aroma: Wonderful balance of hops and malt with breeze of floral notes and a whisper of spicey citrus
Hops: Servicable and aromatic
Malt: Enjoying a playdate with the hibiscus and orange
Head: An enigma; it looks like it wants to come out to play, but is too shy (see notes above)
Lace: If you can get it to a head, then it has a nice presence. But otherwise, it vanishes like a thief in the night
Carbonation: Light
Mouthfeel:  Pretty good, but mostly the spices remain
Temperature Sweet Spot: An odd problem; I like it best cold (under 40 degrees), but the head and spices awaken around 52 degrees.
ABV: 5.6%
My Rating: 6.5 out of 10


Other Reviews Worth A Sip:
The guys over at Beer Advocate weren't impressed with this beer. They liked it, but didn't really think it was worth being in a special "Expressionist Collection:" http://beeradvocate.com/beer/profile/306/90228

I'm not going to disagree with them... much. I think those guys are suffering from a bit of sour grapes syndrome. That is to say, they came in expecting too much. There's nothing bad about this beer, as you might guess from the fact that I'm now on my second six-pack in less than two weeks.
Posted by Mike Mitchell at 4:06 AM No comments: