I don't know how long this one has been in my upstairs beer fridge. Probably a year, but it could be a little more than that. So, you need to take this review with a bit of caution -- I might be talking about old beer here.
That being said, I'm very sorry I let this one sit so long. It's really very good and has a lot of depth. If this were not part of their Brewer's Pride collection (and thus a limited edition), I would head out this weekend too but some more to do a proper review. As it is, I'll just share my Quick Sip thoughts with you. 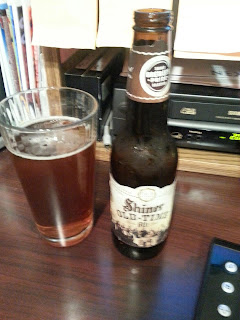 This has a beautiful color: copper with a sweet red hue. The aroma is a combination of spicy malt and heady yeast (the latter I ascribe to age, not brewer's intent). Both of these carry through into the flavor palette, and provide a refreshing and very broad base flavor. I find this to be a really good winter beer. The sweet malt is dominant over the hops, and the strong spices definitely take precedence over the faintly aromatic hops. All in all, the flavor is a rich pageant of fun flavors that are -- for the most part -- working together in harmony.

It has a slightly dry mouth feel (especially for a beer with a 4.2% ABV) that I am uncertain as to whether it comes from the age or from the beer. It probably has something to do with the strong yeast flavor.

I think I got this as part of a family reunion pack, which is their name for a sampler. I'm going to keep my eyes open to see if I can find another sample of this beer. I like it enough that I want to know more about it.

A Quick Comment: This beer got quite a few interesting descriptions from the guys over at Beer Advocate.
Posted by Mike Mitchell at 10:00 AM No comments:

I cannot deny that the name was part of the reason I bought this little beer. I mean, what a cool Rolling Stones reference. But, I have to admit I didn't go into this with very high hopes because I have not really enjoyed a lot of the beers offered from Oskar Blues Brewery. I mean, I don't hate their stuff, but in general I have not been that impressed. I was hoping to be proven wrong this time, but that was not to be. 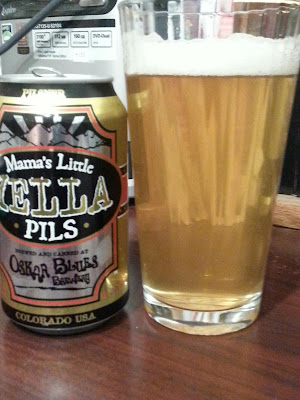 There is absolutely nothing wrong with this beer. It is a nice, refreshing little pilsner, definitely the sort of thing to chill you out more than get you hopped up (especially since it has a very mild hop profile, which is NOT a bad thing for me -- I don't like hops for the sake of hops).

It's just nothing special. It's a nice pilsner, the sort that is perfect for a hot summer afternoon. But that's all there is. So, let's break it down: Not much of an aroma. There is almost no head (although it does leave a fine lace). The color is a testament to truth in advertising: it is VERY yellow. The carbonation is very light, and it does have a floral mouthfeel.

This pairs okay with Mexican food and beef. It's low 5.3% ABV doesn't leave any strong alcohol flavors, so I imagine it will pair fairly well with just about any food. So, in closing, I doubt I'll buy this again, but you never know. It's definitely a non-threatening beer, so if I'm faced with a tricky food pairing, I could be tempted to give this one another try.


From their Website:Oskar Blues’ Mama’s Little Yella Pils is an uncompromising, small-batch version of the beer that made Pilsen, Czech Republic, famous. Unlike mass market “pilsners” diluted with corn & rice, Mama’s is built with 100% pale malt, German specialty malts, and Saaz hops. While its rich with Czeched-out flavor, its gentle hopping (35 IBUs) and low ABV (just 5.3%) make it a luxurious but low-dose (by Oskar Blues standards) refresher.

Visited a local craft beer bar tonight with friends: The Farm Drinkery in NW Houston (aka Spring). Very small venue, but fun. Love that it's not too loud, although that also meant four of us were sitting at the bar where it's hard for the two on the outside of the pack to engage in conversation.


My friends (Lynn & Root) raved about the fried peanut butter & jelly sandwich, but I wasn't in the mood for anything sweet, so  I had the fried pickles and they were pretty good. My wife thought they were a little spicy, and she didn't care for their Ranch Dressing (but that's not a surprise, as she hates almost all bottled Ranch Dressing and prefers to make her own). But I liked them, and although they were a little slow to come out of the kitchen, the friendliness of the server and the competency of the waitstaff more than made up for it.

In all, we had a nice time. My wife hates bars, but I'm planning to visit some afternoon after work and test a beer or two.