I was very surprised by this beer. I was expecting more citrus or spices, but this is a surprisingly bright, cheerful beer. It has pleasant, simple notes that would go well with spicy food. That's appropriate since this particular beer hails from Thailand.

I think this is my first Thai beer, but I could be wrong. I may have had one a few years ago and there is -- I admit -- a slim chance that I may have had this one before. But if so, it was so long ago that I don't remember it at all, so I'm counting it as a "new beer" for the purposes of this blog.


I like this beer, quite a bit. In fact, it almost tastes like an American beer in its lack of spices and unusual flavors. I like it, and would definitely drink this again, particularly with my next spicy, Thai meal.


Another worthwhile review of the brew.
And another here.

PS: One thing I noticed with this beer was just how heavy the danged bottle was. I mean, so much so, that I actually noticed it.  So, I tossed it on my postal scale and compared it to a bottle of Shiner Bock (imagine... I happened to have an empty SB bottle around). The Chang bottle (complete with the elephants on its shiny green label), weighs 11.4 ounces and the Shiner Bock bottle weighs 7.4 ounces. I have no idea why I'm mentioning this, but it just came to mind.
Posted by Mike Mitchell at 12:39 AM No comments:

I know a lot of people split on this particular bottle of holiday cheer, but I really like it. I grew up on the non-alcoholic variety and must admit that I don't have any particular loyalty to any specific brand. As long as it's creamy and has a nice flavor, I'll drink it... usually cold (I know, that's another area where people are split with strong opinions about warm vs. cold).

As an adult, I've mixed my own "adult version" on more than one occassion -- usually with poor results. I never seem to get the alcohol/creaminess ratio quite right. In fact, when i've mixed it poorly, I've even had my share of bellyaches from a bad mix. After that, I've turned to pre-mixed eggnogs... and again, I've had mixed results. Oh, the Pennsylvania Dutch brand is okay, but a bit harsh for my taste, and it certainly doesn't win any points for being creamy. I've also tried another one or two brands (the names elude me because they were not memorable).

This year, however, I was shopping at Randalls in NW Houston and saw a bottle in the wine department (in case you don't know, you cannot buy hard liquor in a grocery store in Texas). It was only $7.99 for a 750 ml bottle, so I tossed it into the basket, right next to the half gallon of Lucern egg nog I'd gotten from the dairy department.

I love this stuff! It is much smoother than brandy-based eggnogs, and the eggnog itself has a nice, sweet flavor. Now, it's still too thin for my liking, so I mixed it in a 50/50 ratio with the Lucern Eggnog, added a sprinkle of nutmeg, and got the beverage I've been searching years to find!

Over the course of the week before Christmas, I had a full bottle to myself (every evening I'd have a few sips while watching the Grinch and wrapping gifts). I finally picked up another bottle for a Christmas party I was attending, and it was a smash hit. The crowd devoured it and they all complemented it on being smooth and rich (so rich that one guest could only finish half a glass before she said there was just too much sugar for her; next year I think I'll bring some low-fat eggnog for her).

This will definitely be part of my holiday staples list from now on. In fact, the reason I'm listing it here is so I won't forget it next year!

Merry Christmas - A few of my favorite songs

Here's just a few of my favorite songs that I like to enjoy this time of year. I hop you all enjoy them, too.

The Pogues, "Fairytale of New York"

I'm aware that there are other versions of the songs listed below, but these are my favorite versions.

I was at a Christmas party earlier tonight, and the hosts served up some delightful libations (along with an awesome array of finger foods): Thanks, Lynn and Root!

One of the beverages on hand was Blue Moon Winter Abbey Ale. Now, I've had the regular Blue Moon beer before, and found it to be very drinkable, particularly in the summer), but this is the first I've had of their end-of-year concoction. And I must say, I was very pleased with it.

This Winter's Ale has a very bright, crisp flavor with a hint of caramel, roasted malt and just the right amount of sweetness to make this just the right drink for this, the first night of Winter (yup, I'm writing this on the solstice). The label says it has a "touch of wheat," and I think they're right... it's just a touch. And a nice one, at that.

The color was a very attractive copper color with a tolerable head (I had to be a bit aggressive to get it to form, but when it did it was good). It dissipated at a reasonable speed and has a decent lace.

I was eating this with fairly salty food, and it went very well with meatballs, Thai-inspired chicken, and a variety of crackers and cheeses. It was good enough that I drank three of them at the party, and then on my way home I picked up another six-pack at Wal-Mart for $7.49 (it was a pleasant surprise to see that they had it in stock, as I was in the store doing some last minute Christmas shopping).

This was a very drinkable beer (it must bee, I've had five so far tonight -- spread out over the past six hours), and one of the better "drinking" beers I've had this winter's season. By that, I mean it's one I can sip and not get too much alcohol, nor does it really try too hard, like some of the more floral and spiced ales I've had of late.  This is a respectable Winter's Ale that deserves to be under a few Christmas trees this year.

By the way, I love Blue Moon's commercial. I think it's very artistic and I really like the effects they use in it. If you haven't had a chance to see it, check it out their Website.
Posted by Mike Mitchell at 2:04 AM No comments:

011. It's beginning to look a lot like Christmas Ale!

Ah, the season is coming, the cat is getting fat (we don't have a goose), and the chilly weather makes me want to sip the bounty of seasonal brews that have hit the stores.

I'm going to be hitting a bunch in short order here (to try to get them in before Christmas, and to catch up on some overdue posts before the end of the year). So, please forgive me if my usual musings meander toward the pith side for a few weeks.

This Friday night finds me with a pair of 12-ounce bottles of Breckenridge Brewery's Christmas Ale. I picked up a six pack before Thanksgiving and have been sipping on it ever since (stuffed it in my stocking at Spec's NW on FM 1960 in Houston for about $8 or $9). Since I'm down to my last two bottles, it's time for the write up.

Before I dive in, though, I'd like to mention the cool, retro label. It's printed on an uncoated paper designed to make it feel old-fashioned. It definitely works, as the main label is almost entirely red and green, printed over a faint canary yellow that gives it a pleasant, charming sense of nostalgia. There's snow on the letters, a wreath around the word "ALE," and it just makes you think of times gone by. There's even a simple crest cast directly into the bottle itself. As far as packaging goes, I give them a solid 10 points. 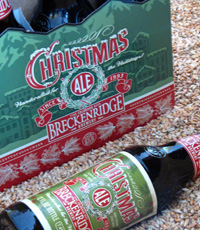 The first thing I noticed when I popped the top (or should I say, "unwrapped the bottle top"?) was a strong aroma. I must admit, I'm having a hard time placing it because the hops are a bit overpowering, plus there is a strong under-scent of some type of fruit (the guy at this blog said he thought it was raisins, but I'm not so sure). Whatever it is, it is definitely strong.

When poured, the color is wonderful, dark brown with copper undercurrents: It's beautiful to look at. The head is rather weak, though. I hardly got any at all when I poured it (even an aggressive pour doesn't do the job). The head quickly settled to a thin film that did leave a generous lace along the sides of the glass.

This beer has 7.4% ABV, and that alcohol makes itself known from the first sip. It just hits the mouth and says, "Ho, ho, ho, here I come." Then it's the hops I notice -- they're too strong for my liking. As with most other strong ABV beers and ales, they just tend to overdo the hops when they raise the alcohol.

The other flavors are present; I get a nice hint of caramel and of dark chocolate (I got the chocolate on my own, and the fact that it's dark chocolate from their Website). But mostly, it's those hops and the malt I taste. Maybe a hint more spice would make it more to my liking... I'm not sure.

As far as Winter beers go, this is a pretty good one. The alcohol will make it a nice way to take off the chill of the night... as long as its not too cold. All in all, I give it a respectable 6.5 out of 10.

PS: As I popped the top on the second bottle tonight, I decided to go for a SUPER aggressive pour: I just dumped it right into the bottom of the glass. I was surprised that I did, at last, get a respectable head on it (no less than 5 inches!). It receded rapidly, though, as I expected, and tasted a little flat. Of course, that's entirely my fault for pouring it like that, but I just wanted to see what kind of head I would get.

Draft Magazine has a short review online, if you're interested: http://www.breckbrew.com/images/reviews/DRAFTreview_ChristmasAle.pdf
Posted by Mike Mitchell at 1:54 AM No comments: