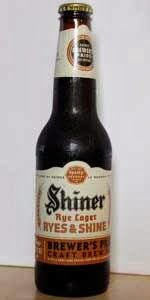 Okay, this one is a bit of a cheat. I drank this waaaay back in March or May for the first time. It was sold only in the Shiner Variety Pack and I had it at my wife's cousin's house (thanks for the great time, Dawn & Josh). I then went out and then bought a Family Six-Pack for the express purpose of getting another bottle of this. Their Family Reunion pack is a sampler of six different beers. One of them is frequently part of their Brewer's Pride series that includes small batches of their experimental beers.

Okay, since I'm drinking and being honest, I will tell the bitter truth. I actually rearranged the six pack so I got TWO bottles of this. Yes, I'm evil. I know it. Alas, repentance isn't something I'm into right now. At least not while drinking.

Popping the top gets you a strong scent of hops and a strong grain that I can only guess is the rye. I'm guessing because I don't drink a lot of rye-based beverages. In fact, most of my experience with rye is limited to the deliciously dark bread I use to make a turkey sandwich.

I was pleased that the flavor was smoother than the hops and strong aroma would lead me to expect. It also had more malt than I expected. There is definitely a tang to this lager, but it is not bitch-slap in the face strong. It's got a presence, but not too bad.

From the Label: This Small Batch Brew is the second in our Limited Edition Brewer's Pride Craft Brew Series. It's a medium-bodied, dark brown lager brewed with rye malt and chocolate rye from Germany, caramel malt and three hop varieties. The result is a rich, roasted dry finish with a touch of sweetness and hops, which honors our old-world brewing traditions. Prosit!

This beer has a lot to offer to those seeking something new and different. I can't see it becoming a favorite, but with its creamy texture, strong (but not overpowering) addition of rye, I could definitely see myself sitting back with some of these at my next family reunion.

Two weeks ago I had the distinct pleasure of visiting the Brigadoon Brewery at the Texas Renaissance Festival near Plantersville, Texas. Renn Fest is one of my favorite things to do to ring the the autumn season because it gives me a great excuse to go out, sample lots of beers (or just drink plenty of my old favorites) and watch great entertainment like Ded Bob or Iris & Rose.

While I was there, one of the brewers starting talking about his love of mixing beers. This is something I've had little experience with. Sure, I've had a few Black & Tans in my younger days, and sure, I'm familiar with how vintners take different wines and blend them together to create a perfect wine. But I've never really given much thought to blending beers to create something new.

That's why this week's beer choice was a pleasant surprise: Monk's Cafe Flemish Sour Ale is, according to the label, a blended beer:

We blend young and old beers to make this mildy tart sour ale. Light bodied with a lactic/sour nose and a bit of sweet and sour in the finish. Very refreshing!


I've never had a Flemish Sour Ale before, so I didn't have any preconceptions about what to expect. Other than it being "sour," of course. Popping the top released a strong scent of pepper with other spices hiding below. I then detected subtle scents of citrus and other aromas that I couldn't quickly place.

My first sip was a pleasant surprise. Based on the dark color and peppery smell, I expected something harsh like an IPA. Instead, I got a wonderful taste of summer that reminded me instantly of a Shandy (that is, a mildly alcoholic beverage popular in England during the summer -- think a lemony soft drink/wine cooler hybrid).  This has a wonderful, tangy bite of lemon citrus (with maybe some grapefruit lurking in the lower levels) that instantly made me long for the hazy, lazy days of summer.

Even though this is a Belgium import, this would be welcome in the cooler of anyone inner tubing down the Guadalupe River in July. In fact, except for the dark color, this really reminds me more of a Mexican import than an Euro beer. My hat definitely goes off to the monks on blending this excellent concoction of new and old beers.

At about $5 - $7 for an 11 oz. bottle (if memory serves me right; I bought this a while back and can't find my receipt), I don't think this will become a staple of my summer drinking, but I would definitely be willing to invest in a few bottles for the next summer solstice. This is a great, light-tasting beer with a really pleasing taste of lemon. I'd really enjoy the opportunity of discovering which foods pair best with its tangy goodness.

Thoughts from the bottom of the glass:
Type: Flemish Sour Ale
Color: Deep Copper/brown
Aroma: Pepper with hints of spices & citrus
Hops: Milder than I expected
Malt: Mild and in balance with the hops
Head: Thick and creamy, but fades quickly
Lace: Nice, but fades quickly
Carbonation: Light
Mouthfeel:  Crisp and refreshing
Temperature Sweet Spot: Around 55 degrees F.
ABV: 5.5%
My Summer Rating: 7.5 out of 10

Other Reviews Worth A Sip:
The guys over at Beer Advocate seemed to like this, for the most part. No one really came out against it (one or two bemoaned that it wasn't sour enough), but few praised it outright. Most of them seemed to have the same idea I did: This was a pleasant change of pace from the usual fare. I was surprised that so many of them detected raisins in the scent/taste. I didn't get that at all. But then again, that's what makes reading beer reviews so much fun -- someone will have a different take on things than you did.  Here's what they had to say:
http://beeradvocate.com/beer/profile/48/10482

Posted by Mike Mitchell at 3:28 AM No comments:

I am not going to write for reviews tonight (and probably again tomorrow). I am drinking a few beers and watching some TV, so I am just going to write some very fast impression.

Two Hearted Ale IPA by Bells Beer
www.bellsbeer.com
Fair disclosure here: I think this has been in the refrigerator for a while now. Honestly, it might be a year old. I think my brother Pat sent this to me, because I don't usually buy IPAs. My first impression was that it had an odd older. Not an aroma, but an odor. It is probably just subliminal suggestion from the label, but I thought it smelled fishy. Maybe if salt I'm smelling. There are definitely strong hops in this one. And the usual bitterness that I am not a fan of. I think I'm smiling spices and pepper which are not ubpleasant.

From their Website: Bell's Two Hearted Ale is defined by its intense hop aroma and malt balance. Hopped exclusively with the Centennial hop varietal from the Pacific Northwest, massive additions in the kettle and again in the fermenter lend their characteristic grapefruit and pine resin aromas. A significant malt body balances this hop presence; together with the signature fruity aromas of Bell's house yeast, this leads to a remarkably drinkable American-style India Pale Ale. 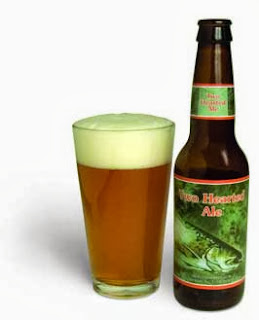 There might even be a hint of citrus buried under the terms of hops. I suspect that fans of IPAs will think that this does not go far enough. But I think it goes too far. My first sips leave me very unimpressed.
My score: 4 out of 10