025. Jester King's Wytchmaker will cast a spell on you

The label of this Wytchmaker Rye India Pale Ale is what first caught my attention -- it's printed on foil and has a very odd look to the artwork. I've seen this style before (thin, scratchy lines), but can't quite place it. Perhaps someone else can look at the label and help me figure out the name artist I'm trying to think of. 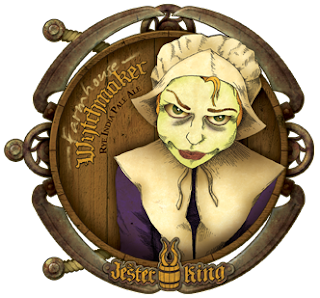 Next, the text on the bottle gave me pause...


The culprit behind the Salem Witch Trials was not demonic possession (which would have been kind of cool), but ergot infected rye. The rye malt and truckloads of hops in this ale won’t likely transform you into a witch, but will hopefully get you to thinking of your own possible transformation. Perhaps into an individual; a free thinker; someone who speaks their mind and follows their dreams. Personally, we’d go with transforming into an army of flying viking-bears, but what do we know?


Jester King Craft Brewery is an authentic farmhouse brewery in the beautiful Texas Hill Country, on the outskirts of Austin. We brew what we like, drink what we want and offer the rest to those who share our tastes.

I've studied the Witch Trials of Salem and don't believe for an instant that bad rye beer was the culprit. The culprit was mass hysteria, pure and simple (and I mean that in the purist, medical sense). But on to this beer that I could quickly go mad over. This is made only a few hundred miles away in Austin, Texas by a cool-sounding group of people at Jester King Craft Brewery (no secret if you read all of the label text above).

The aroma was very hoppy (which I expected), but I didn't detect the usual harsh notes that I usually find in a strong-hops ale. In fact, I found it pleasant with a hint of aromatics and trace of yeast that didn't make me think of bread, but somehow blended together in a pleasing way.

I had let the beer warm to about 50 degrees before pouring it, and started with a very soft pour (slowly on the side of the glass). I was rewarded by a stunning head of almost pure-white foam. It was dense and reminded me of a topping of marshmallow cream atop a cup of warm Irish coffee. The color below the head, though, did not remind me of coffee, as it was a cloudy brown with a haze of strong carbonation that continued to rise from the bottom of the glass.

This started off very balanced and I enjoyed it. But, the hops built a foundation of bitterness in my mouth that kept growing as I drank it. I also monitored the temperature and found that, as expected, the bitterness increased in tandem with the temperature. For me, the sweet spot was below 50 degrees, which, by the way, is what they list on the back of the bottle (I would love it if more breweries did that).

After drinking a bit of this beer (it's in a 1 pint, 4 oz bottle), I realized that I was getting a dryness in my mouth that I couldn't place. After doing some post-drinking reading, I found a few folks who attributed this to some rye in the mix. That surprised me as -- which you might recall from last week's bitter encounter with Sisyphus Barleywine Style Ale -- I didn't come away being a fan of rye. This week's meeting, though, has intrigued me to continue seeking out rye to find out more about it.


But back to the beer: I chilled the bottle again and found that, when it was cooler, I did enjoy it more, eliminating the "bitter beer mouth" that some other people found as they drank their way to the bottom of the bottle.

This was an expensive beer: I paid about $8 for it at Spec's Liquoor in NW Houston. Still, it was 1 pint 4 ounces (750 ml), so this is perfect for sharing with a buddy. I was eating Mexican food with it and it didn't pair well, so I finished it afterwards and enjoyed the ale by itself while watching the Avengers animated series on Netflix (check out a brief review I wrote about it over at my other blog). I can't tell if it's the thought of the salsa and chips in the other room, or if the dryness is making be crave water and something salty. In either case, though, I wouldn't have minded someone casting a summoning spell to bring me another bottle of the Wytchmaker.

I enjoyed it and plan to pick up a fresh bottle soon. This is going to be added to my list of favorite beers (check out the upper-right corner of this page).


Thoughts from the bottom of the glass:
Color: Hazy brown, slight touch of amber
Aroma: Not as bitter as I expected, with a hint of aromatics and citrus
Hops: Surprisingly balanced with the yeast
Head: WOW! Huge, white and thick
Lace: Amazingly thick and impressive
Carbonation: Strong, helping add to the haze
Temperature Sweet Spot: Below 50 degrees
ABV: 6.8% (according the the label; online sources list it at 6.6%)
My Rating: 8 out of 10

Other reviews worth a sip
I am in agreement with some of the reviews at the Beer Advocate. Most of those guys liked this, but it wasn't a slam dunk, as some did not fall under its spell.

However, this guy over at Beer Geek Nation really liked it, although he detected more fruit notes in it than I did (view from this link, or just watch it below http://youtu.be/8yFPjf3cQz8 )