Great dark beer. I think it's going to be one of my favorites.
Posted by Mike Mitchell at 10:41 PM No comments: 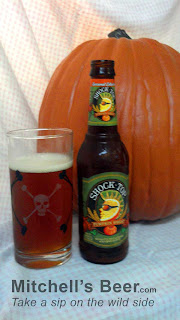 Halloween is a time for scares... and I got the biggest scare of my life this past Saturday night when I realized that I had missed my deadline for this week! I know I've been late before and had to come back to fill in details and photos(in fact, I'm still missing a few pics here and there), but this is the first time I've actually missed the deadline.

I was out in the country for a barbecue and memorial on Saturday (waaaaay out in Bellville) then went up to Spring for a costume party and games with friends. Between all that, I just wasn't able to sit down and write about what I was drinking that day (the week before had been filled with drinking some of the Magic Hat Hex Ourtoberfest I squirreled away before it went out of production).

BTW: The barbecue was a lot of fun, but I spent the day drinking Shiner Oktoberfest, and since it's not a "beer that is new to me," it's really not eligible for one of my reviews (although after I hit 50 reviews I think I'll go back and start reviewing some of my old favorites next year). For now, though, I'm sticking to new beers only.

First Impressions
So here I sit, the day after Halloween and I'm finally sitting down to enjoy a glass of beer that's new to me. This week (or, technically, last week) I'm popping the top on Shock Top Pumpkin Wheat. I was honestly hoping to find something a little scarier for Halloween, but I've already done most of those recently so now I guess it's time to move into the Autumnal beers for the harvest season.

My first impression was pretty lackluster, which unfortunately puts it in the same range as the other Shock Top beer I reviewed back in June. I've had pumpkin ales before, and I really don't much care for them. But I always break out my bottle opener with the highest of hopes in mind (despite the creepy Midnight Syndicate music I'm listening to as I write this review). I wasn't expecting the pumpkin to be overpowering, but I expected it to be present and detectable. As it was, though, sniffing the freshly opened bottle, I found there to be almost no aroma at all.

Fortunately, I read the directions on the label before pouring it into my cool skull glass:

Pour down side of glass until 1/2 inch is left in bottle, swirl, and pour remaining brew to properly blend spice and release the aroma and flavor.

I followed the directions and still wasn't impressed. The aroma just wasn't there, and like that equine-riding horror from Sleepy Hollow, I couldn't find a head worth writing home about. At best I got a quarter-inch lightly brownish white head that faded into the night very quickly, leaving so little evidence that even Mulder would agree it wasn't there.

However, I know that most spiced beers and ales don't come alive when they're cold, so I waited for it to warm up a bit and -- sure enough -- when the beer warmed to over 50 degrees, I could finally smell the spices, but really didn't get much improvement in taste (Oh, I took a taste when it was cold and it was just so mediocre that it's not worth commenting further on -- let this warm up a bit before you imbibe).


Letting Things Heat Up a Bit
I drank one bottle of this while it was fairly cold and it really didn't do much for me. The alcohol was there, but the flavors and spices weren't. They just seemed to trapped, unable to break out to the surface. So I let it warm up significantly more for the second glass, and finally around 58 degrees this beer came alive.

Now, we're not talking Dr. Frankenstein yelling "IT'S ALIVE!" But more of a subdued realization that this beer has some life in it after all. At the warmer temperatures the spices were more pronounced and I finally found the pumpkin they were talking about. All in all, it finally became a fairly decent seasonal beer.

A few comments about color and other things: It's a cloudy, medium-to-strong carbonated orange color. It looks pleasingly appetizing and I like the way it sat in my mouth, leaving a nice wheat beer finish without overpowering me with the spices.  That being said, though, it's just good, not great. I kept waiting for the curtain to slide away to reveal something interesting or unique. But that never happened.

What I wound up with was a nice solid seasonal wheat beer that I would be happy to drink at a party, but would never make a special trip to the liquor store to find (which I did do for Hex Ourtoberfest). I also drank it with some roasted chicken and didn't care for the pairing at all. There was a little fat in the chicken and this beer did not blend well with that. It actually made both the food and the beer taste weird and uninviting. To be honest, I can't really imagine what I would eat with this, unless it was some type of vegetable platter... and even then I couldn't imagine it pairing well with any dipping sauces.

Fortunately, man does not live by food alone (yeah, I'm paraphrasing), so for tonight, this beer stands on its own. Proud, but not to proud, to help bring the year to an end with a celebration of harvest, family and friends.

Thoughts from the bottom of the glass:
Type: Belgian Wheat (spiced)
Color: Dullish cloudy orange
Aroma: Dead at cold temps, but warmth and stirring release nutmeg, spices and a faint hint of pumpkin
Hops: Hiding beneath the beadcovers like a scared child until things warm up; after that they 're okay but not too domiant
Malt: Lurking in the shadows, waiting to play with the spices
Head: Quarter-inch, mostly thick white, but fades quickly
Lace: Like the invisible man, I couldn't see it
Carbonation: Strong/Medium
Mouthfeel:  Pretty good, but mostly the spices remain
Temprature Sweet Spot: Above Ice Cold -- the spices don't come alive until it warms over 50 degrees, but it LIVES when it's around 58 degrees
ABV: 5.2%
My Rating: 6.5 out of 10

Other Reviews Worth A Sip:
This fellow seemed to have the same reaction I did: it was okay, but not brilliant.
http://www.firstpourwine.com/2012/10/20/shock-top-pumpkin-wheat/

Posted by Mike Mitchell at 7:42 PM No comments: