The leaves have begun to turn -- well, as much as they do here in this part of Texas. Which is to say, not a lot. But still, the heat has broken for the most part (it only got up to the low 80s today). Which means I'm slowly getting ready to transition from the lighter beers of summer to the heartier fare of fall and winter.

But, of course, before I start chugging porters and stouts, it's time for the autumnal bacchanal that is OCTOBERFEST. Yup, that time of year when even the casual beer drinker sets aside his Bud Light and tries something with a German name.

And for me, it's high time to dive into the plethora of seasonal offerings that bridge the seasons.

The first offering of the year is a definite winner for me. And it's surprising in two ways: 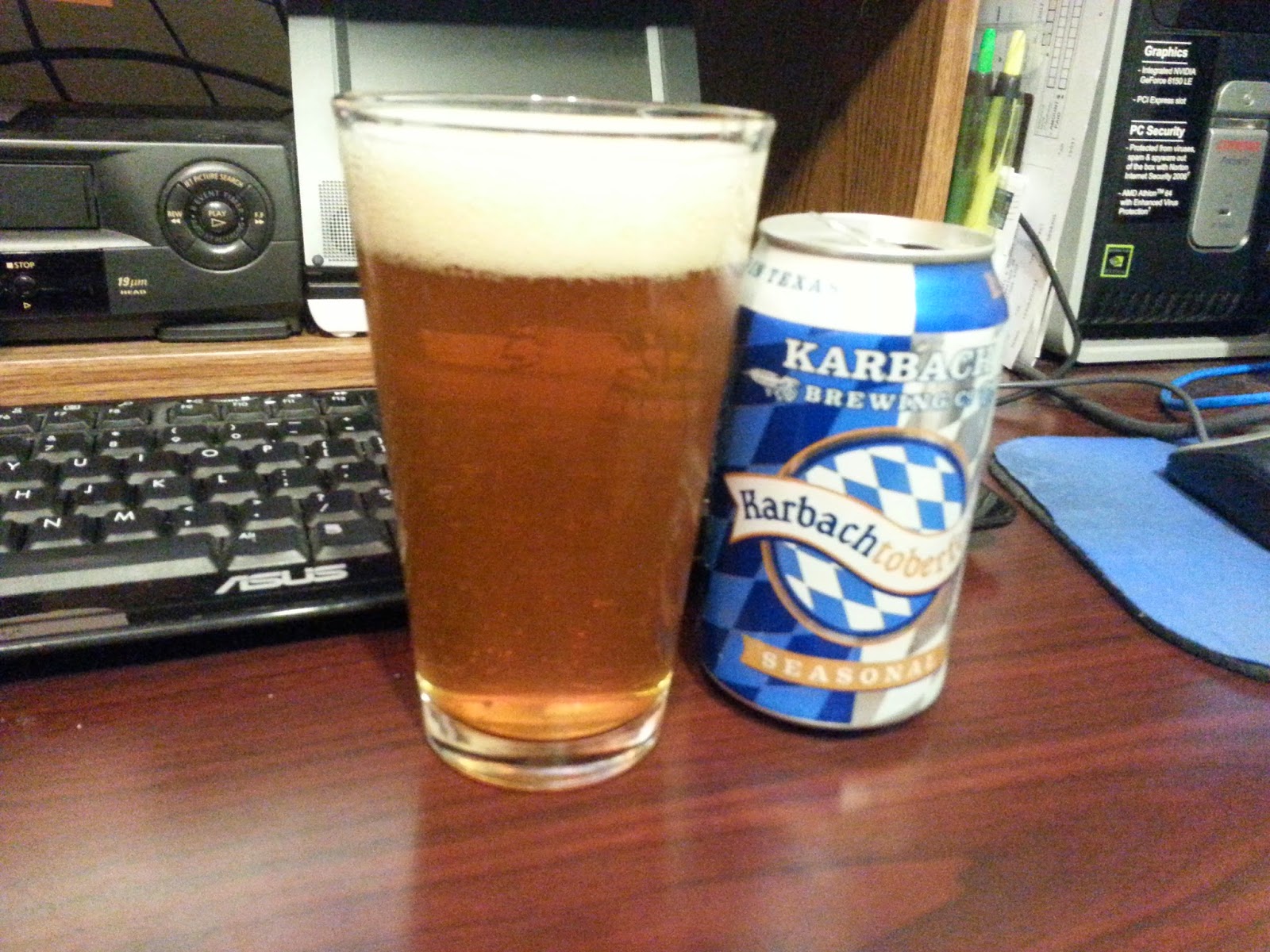 Yup, I'm talking about the great hometown brewers at Karbach Brewing Co., and the brew of the hour is their seasonal Marzen-style beer, Karbachtoberfest. Okay, they get me with the name right off the bat. Anyone who knows me in person has probably spent serious time developing the mental skills necessary to filter out the almost non-stop string of puns and word play that streams from my mouth while I'm drinking. I make no apologies for it -- I am who I am. And, who I am at the moment loves this beer.

I'm on my second six-pack. Yup. I'm enjoying it that much and this could well be my go-to beer for the season. Of course, I've only tried a handful of other beers lately (some of which don't warrant reviews, a few others that will (one of them being Sam Adams Octoberfest, which will make the list soon).

Pour me another, please
I'm not gonna lie -- I'm on my second Karbachtoberfest tonight. It's light, it's late, and I don't have to get to work until after 10 am tomorrow. So I'm good to relax and enjoy the pleasant tart notes that play around with citrus and hops, but lets the sweet malt take center stage and belt out the high notes in a power ballad of flavor. In most ways, this is an atypical Marzen, which I must admit is a beer I like but am not an expert on.

Marzen is German for the month of March. Here's the lowdown from BeerAdvocate.com:

Before refrigeration, it was nearly impossible to brew beer in the summer due to the hot weather and bacterial infections. Brewing ended with the coming of spring, and began again in the fall. Most were brewed in March (Märzen). These brews were kept in cold storage over the spring and summer months, or brewed at a higher gravity, so they’d keep. Märzenbier is full-bodied, rich, toasty, typically dark copper in color with a medium to high alcohol content.

The common Munich Oktoberfest beer served at Wies'n (the location at which Munich celebrates its Oktoberfest) contains roughly 5.0-6.0% alcohol by volume, is dark/copper in color, has a mild hop profile and is typically labeled as a Bavarian Märzenbier in style.

Now, this beer is not a standard Marzen. In fact, it reminds me much more of a summer beer -- and considering that it's still very warm here, its not surprising that I'm enjoying this so much. As I mentioned above, this is tart, but not bitter. This reminds me of citrus, but maybe it's spice. No, not that either. One guy at BeerAdvocate.com said this had pepper notes, but I'm not getting that. Nor do I see the color they describe: Copper. There is no read in any of the cans I've popped over the past week or so. In fact, the color is just a hazy sort of yellow that really doesn't impress me. It's not bad, but it's certainly no Moylan's Danny's Irish Style Red Ale.

Every year in Munich a little party is thrown.  If you've ever been, there are some things you may or may not remember: Lederhosen envy, oompah music, dirndls, and rolling down the hill.  One thing you surely haven't forgotten is the extremely quaffable beer.  While you may not be able to attend Oktoberfest this year, you can experience the world's biggest beer fest right here with Karbachtoberfest.  An authentic, Bavarian-style Marzen, decotion mashed with Vienna and Munich malts, cold fermented and aged for six weeks, this beer pairs well with pretzels and sausage, but it tastes mighty fine on its own.  Eins, Zwei, G'suffa!

I don't think this is a remarkable Marzen for Oktoberfest. But I'm really enjoying it. I will review a few more beers to make sure I'm not passing up on something else that's awesome, but I predict that I'm going to go out and stock up on case of this to get me through to Thanksgiving.

Thoughts from the bottom of the glass:
Type: Marzen Lager
Color: Hazy Yellow
Aroma: Malt & faint hops
Hops: A bit strong for this type of beer, but not too strong
Malt: Key performer -- up front and sweet, but not dominating
Head: Thick, white, and temporary
Lace: Almost none
Bitterness: Faintly in the aftertaste
Carbonation: Light; vanishes quickly
Mouthfeel:  Crisp with dry finish
Temeprature Sweet Spot: 40-55 degrees (wide range: crisper when colder, more complex hopes when warmer)
ABV: 7%
My Rating: 8 out of 10

Other Reviews Worth A Sip:
The BeerAdvocate.com guys were all over the map with this one. Most thought it was a bit weak for an Oktoberfest, and I can't argue with that. But those who enjoyed it really sang its praises. www.beeradvocate.com/beer/profile/26762/85078/

Posted by Mike Mitchell at 4:34 AM No comments: