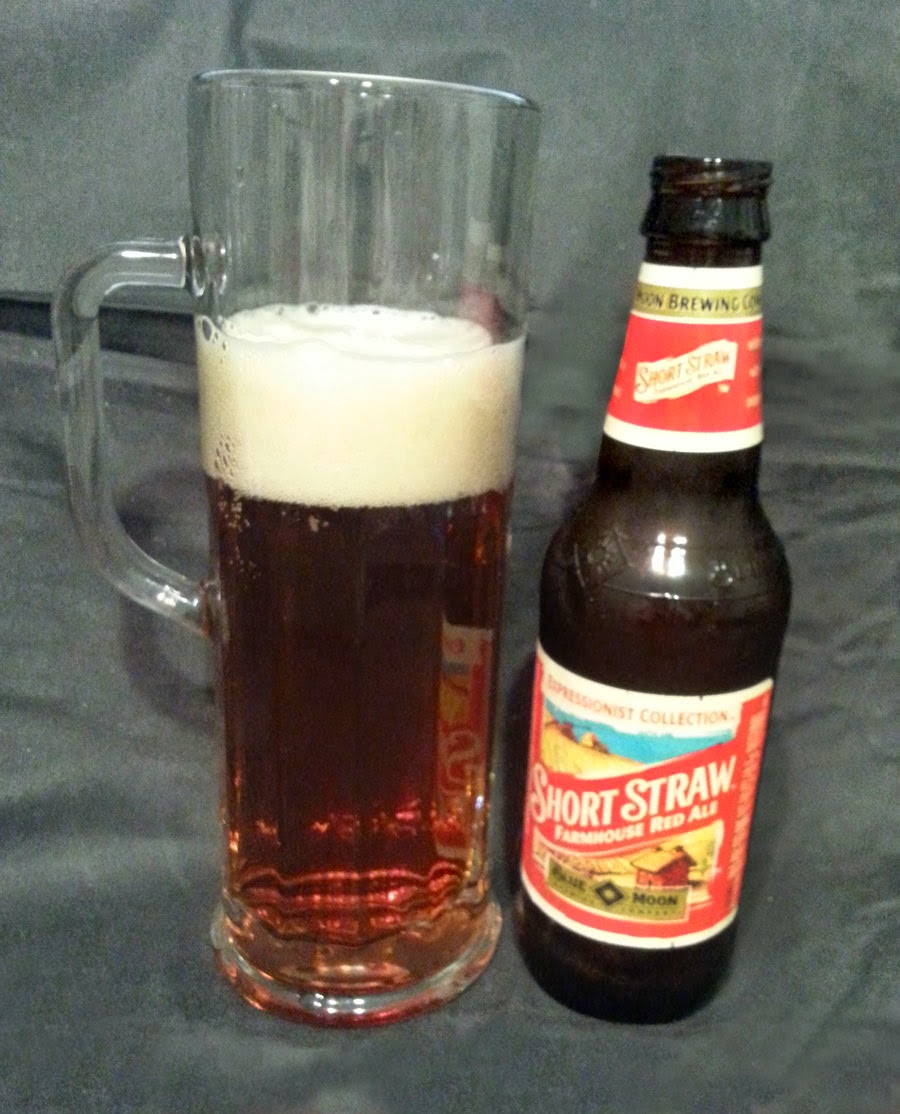 
Posted by Mike Mitchell at 5:00 AM No comments:

Summer is here -- at least in temperature and humidity, if not in date. Dog walking is now and after midnight activity. And even then the humidity can be oppressive. To shake off these early summertime blues, sometimes I like to come home and pop the top on a nice cold one. And the beer in this bottle is a lot lighter in color than what I prefer in the dark nights of winter.
Tonight's lucky bottle is from the Goose Island Beer Company.

I'll be honest, I am not be a fan of the politics that have seeped out of Chicago, but I am a fan of this brewery. I've had a couple of their beers that I have enjoyed quite a bit. This one is no different, in that regard: 312 Urban Pale Ale is a solid beer that has the right mix of flavor and crispness that I look for in a summer beer.

From Popped Top to Glass
The beer has almost no aroma when cold, but when allowed to warm up a bit, floral notes and citrus become apparent. There's a hint of sweetness hiding under the mountain hops aroma... but that sweetness doesn't make it into the glass itself.

Colorwise, this is an unusual beer. In one light, it looked rather dull and almost yellow. But, when photographed against a dark cloth, suddenly it turned into a pleasing golden color with hints of copper. The Goose Island web site lists the color as "Marigold," but I don't agree with that. It's really just a pleasing golden color.

Poured with a gentle slope and care into the glass, it generated a heady two-finger layer of foam that was a bright white. Just judging this beer by its looks, this brew looked like it had a lot to offer. That did not immediately translate into the glass. My first taste left me with the impression that this is a nice beer -- but almost completely unremarkable.  In fact, if this review were based on a 2-3 ounce sample, I would have given it a 5 out of 10.

But, being mindful of my responsibility to you, the reader, I didn't stop at just a few sips. I kept on drinking the bottle, just to make sure I was being thorough. After all, I do need to maintain some levels of journalistic integrity, don't I? So, braving on, I began to detect more subtle notes in the beer that I found both surprising and pleasing.

As I said, there are floral and citrus notes in the nose and the body. The light carbonation is pleasing, but it and the head seemed to fade faster than I expected. It did leave a lot of lace in the glass, however. And who doesn't like lace-lined beer glasses?

"We are from the city that invented the skyscraper. We constructed our Urban Pale Ale on a balanced malt backbone, so the citrus hop aroma and crisp flavor can stand tall."
--From their Website, www.gooseisland.com

The mouthfeel is good -- not overly dry or sweet. As the beer warmed, the malt did seem to release more sweetness, but on the whole, this beer was a little bitter... but in a good, citrus way, not in an overly hopped or way.

Some Like it Hot  -- Or at least warm...
I found the bitterness to be very strong when I tasted it cold. Under 40 degrees, this is an almost disagreeable beer. But when allowed to thaw out a bit, it gets downright pleasant around 57-60 degrees. This is a good beer, but I don't think it's going to come home again this summer... or next. Oh, I wouldn't snub it at a party, and I might actually recommend it to good ole Cousin Josh as something he might like. He tends to like beers with strong hops or more bitter flavors. I think this might be the sort of thing he'll enjoy, so I'll save a few bottles for him and see what he thinks of it.  I'll let you know what he thinks.


Thoughts from the bottom of the glass:
Type: Pale Ale
Color: Gold with whispers of copper
Aroma: Citrus and mountain hops
Hops: Aromatic mountain hops with hints of floral
Malt: Solid and dependable, but it's working in the chorus, not taking the lead
Head: Super white and fluffy -- two fingers thick
Lace: Heavy -- more impressive than I was expecting
Carbonation: Light
Mouthfeel:  Crisp, hints of citrus, not too much alcohol
Temeprature Sweet Spot: 57-60 degrees
ABV: 5.4%
My Rating: 6.5 out of 10
Worth a sip when the heat is on

Other Reviews Worth A Sip:
Most of the guys over at BeerAdvocate.com did not, for the most part, like this beer. Most of the comments focused on the bitterness and more than one guy mentioned that it looked thin and had a poor head. I'm betting these guys tried to drink it cold. At

Posted by Mike Mitchell at 10:30 AM No comments: