I wouldn't call it a chill, exactly, that has been moving through the air of late. No, certainly not a chill. But the dog days of summer seem to have settled down for a cat nap (so to speak) and although I doubt we've seen the last of temperatures in the upper 90s (history suggests that the beasts of summer will bark one last heat wave upon us before the end of the year), there is definitely something autumnal in the air. 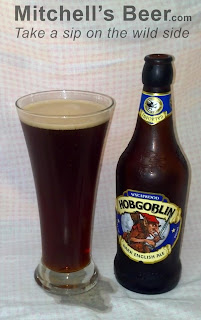 The sun shadows linger longer on the walks as the days wane and the pine needles seem more eager to join gravity and air for their dance to the ground. So, although I wouldn't call it a chill, I would say that autumn has arrived to Houston and we are heading into the Witching month of October.

So, to celebrate the turning of the season, I'm going to devote the month of October to a single theme: Halloween and Autumn. Since there are only four Saturdays in October this year, I decided to go trick or treating a little early and dive into my theme a little early. Think of this as my...

Happy Hour With Hobgoblins
My first beer of this Halloween season is very appropriately named: Hobgoblin Dark English Ale. This brew is an import from the fog-shrouded shores of Olde England, appropriately crafted (probably in a deep cavern haunted by the souls of many a wayward drunkard) Wychwood Brewery.

Popping the top of this 1 pint 9 oz. bottle was like opening a cupboard in a Hogwarts cooking classroom: it delivered many faintly enticing aromas ranging from chocolate, toffee, malt and a hint of something exotic that I couldn't quite place.  After the exciting aroma, I was very disappointed by the pour. I started with a safe pour, but then got very aggressive near the end, but to no avail: I just couldn't get a good head out of the bottle I poured. The lace turned out to be equally disappointing. Perhaps it was trying too hard to fit into the Halloween theme because, like a ghost, I just couldn't see it.

The flavor, though, was something else. After the almost-sad pour I approached my glass with diminished expectations -- only to be wonderfully surprised! Like Sabrina the Teenage Witch popping in with a plate of cookies, I was gifted with a wonderfully malty ale that brought sweet notes of chocolate, toffee and a delightful undercurrent of exotic hops. This is just the sort of thing that could keep me warm while riding my broom on a moonless night.

My first glass was served around 45 degrees and I really like the way the cold mellowed out the hops and brought the sweet flavors to the forefront. Since this was an English Ale, I suspected I would need to drink it tepid to really enjoy it, but that was certainly not the case. As a cold beer this was refreshing, sweet and chock-full of malty goodness. It was something I really enjoyed.

How Sweet It Is
Of course, I'm never satisfied with one sip (and since this was a tall bottle, that certainly wasn't a problem). So I let it warm up a bit to find out what it would be like if I left it too close to the alter flames during the summoning ritual. It turns out that a few minutes of heat was not a bad thing. Letting it warm up to 60 degrees awoke the hops that had been slumbering beneath the thin foam like a certain creature from a certain darkish lagoon. However, if I let the ice caps melt completely and drink it at 70 degrees or warmer, then the hops run amok and the malt cowers like a Divorce Lawyer in a cellar during the zombie apocalypse (okay, even I admit that one was very stretched...).

For this beer, a nice chill will serve it well.


From the Label:
A strong, dark ale brewed by the UK‟s largest producer of organic ales. Full bodied and well balanced with a chocolate, toffee malt flavor.  Moderate  bitterness and a distinctive fruity character with a ruby red glow.

I bought this ale because it looked to be a nice dark ale (which is the sort of thing I like when the blazing summer sun wanes and gives way to the gentle warmth of autumn. And because it had a cool picture of a hobgoblin on the label. It turns out that this Hobgoblin is likely to hang around well past Hallow's Eve and become a permanent part of my winter larder. I'm surprised to say that I'm adding this British Import to my favorite's list, even though I've no idea how it will pair with food (if I run some food-matching tests, I'll let you know).


Thoughts from the bottom of the glass:
Type: Dark Ale
Color: Cloudy Dark Brown
Aroma: Enticing, malty, chocolaty with faint exotic under-notes
Hops: Understated at cold temperatures, but they come alive when it warms to the "sweet spot"
Malt: Delicious -- definitely the star
Head: A fingernail of thin brown, biscuity foam
Lace: None to speak of
Carbonation: Medium
Mouthfeel:  A nice biscuit-like lingering sensation that plays well with the carbonation
Temprature Sweet Spot: Under 55 degrees
Temperature Hops Spot: Hops come alive between 60 - 65 degrees
ABV: 5.2% in bottle, 4.5% in cask
My Rating: 8.5 out of 10

By The Way
These guys have a really cool Website. I discuss it over in my mid-week update, Mitchell's Beer Talk. Check it out.

Posted by Mike Mitchell at 2:43 AM